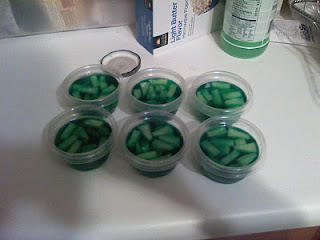 By a show of hands who likes Gelatin? Me too. What I don't like is paying three times more for prepackaged gelatin cups than you would for homemade ones. I know what you're thinking, prepackaged is fast, easy and convenient. Have you ever actually made gelatin from the package? It takes ten minutes prep work and 4 hours in the fridge. You can make a double batch on Sunday and have plenty for lunch throughout the week. You can do the same for pudding cups as well and they take even less time. So in case you haven't ever made gelatin from a package before I am going to show you how. 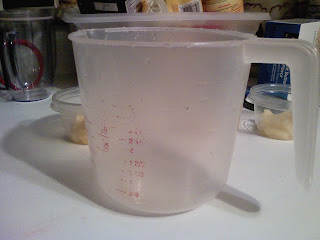 You will need: gelatin of your choosing (I'm using lime) fruit of your choosing, drained (pineapple for me) 1 cup of boiling water and 1 cup of cold water, a large mixing bowl with a spout or preferably a large 4 cup measuring cup, 6 small 1/2 cup storage cups with lids (more on those in a bit) and a clear spot in the fridge for them to land. 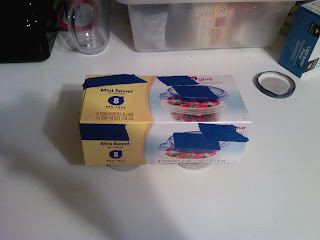 First off you want to boil the water, if you don't want to stand around for hours waiting on it to boil I'd suggest using your very smallest pan to boil it in and use a lid. It takes me about seven minutes to boil water in my little four cup sauce pan. While the water is boiling set up your assembly line. Put out six of your cups, mine are made by the company with the happy name and they come in an eight pack for $2.50 but you might be able to find something similar at a dollar store in your area. Just make sure they have good tight lids. 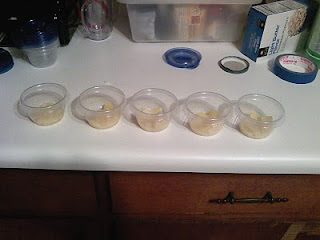 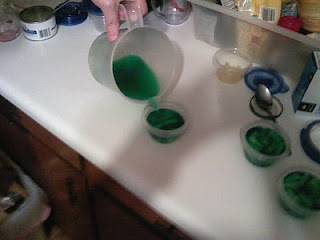 Now you need to pour the gelatin into each cup, being careful not to over fill them. The first time I did this I had five cups and wound up making a mess when I put the lids on, under filling is better than over filling. Now put the lids on the cups and stash them in the fridge for four hours. 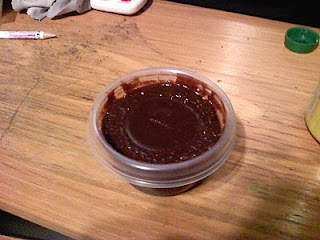 For pudding you need two cups of cold milk and the package of instant pudding. Whisk them together for two minutes then pour them into each cup, you'll get four or five pudding cups. Fill them as much as you can so the lid sits right on top of the pudding, that will prevent a pudding skin. Stash them in the fridge for five minutes before you eat them.
My cost came out to be  about $.16 per cup which is a third of the cost of the prepackaged gelatin cups. $.34 cents might seem like nothing by itself but if you eat the prepackaged cups often you could save a lot of money. If you do one in a lunch every week day in a year you will save about $90. The pudding costs about $.17 and the savings you see will be very similar to the gelatin cups.
So now that you know how easy it is give it a try. If you do try any combos of gelatin flavors and fruit leave me a comment to tell me what you did. You can also leave a comment if you have any questions about the process or any suggestions for future posts.
Posted by Chris