Ok as promised I am posting a new tutorial for a cat toy. This is my cat Bogie's favorite toy. You will need 1 practice golf ball, 1 jingle bell, 1 size G crochet hook and enough scrap yarn to cover the ball completely in single crochets. (scissors and duct tape may also be needed) 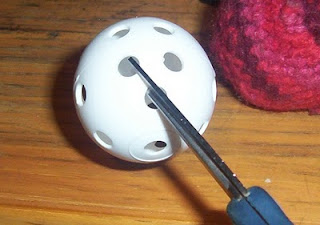 Next you need to get the bell into the ball. If your bell is small enough you will only need to make one small cut on the ball to get it in there. I do it with a regular pair of craft scissors. I just find the smallest section of plastic between two holes and cut it. That should give you enough room to get the bell inside the ball. (say that five times fast) If you have to cut a large hole then you can put a piece of duct tape over it to keep the bell in until it is covered. 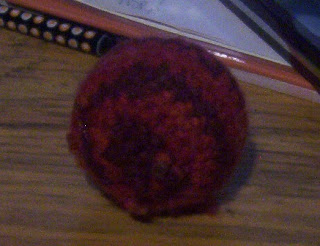 Now you need to get crocheting and it is simple amigirumi, meaning it is constant single crochet never joined until the end. I didn't write a pattern for it but it is simple you just increase on one side and decrease on the other to make a ball. If you don't like amigirumi you can join each round increasing in the beginning and decreasing in the end to make it a ball. 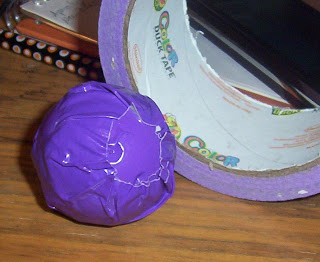 If you don't know how to crochet you can go for the duct tape option. I like duct tape and I have it in a ton of crazy colors. You can make a bazillion things with it. But right now I'll just do a cat toy. I just cut two strips of it long enough to completely cover the ball. I put one on it and smoothed it down as much as I could then I put the other on in the opposite direction and smoothed it down. Make sure you don't have any exposed sticky though. Otherwise you will end up with cat toy covered in cat fur.
Posted by Chris