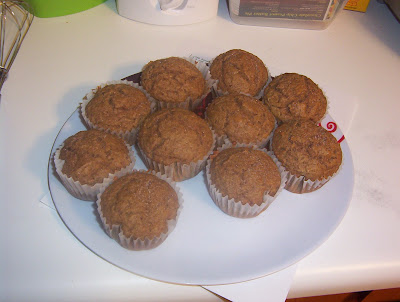 They say necessity is the mother of invention and it has led me to invent another muffin recipe. I had a jar of unsweetened apple sauce that none of us were eating. I swear they take sugar out of that stuff because it was actually a little sour. I tried putting cinnamon and sugar into the sauce and eating it that way but it was still icky. I decided tonight to do a muffin with it to see how that turned out. I really like it. It isn't terribly sweet but it is good. They are pretty sensible so they would make a good breakfast. They would also be good to give to teachers so that it is something that isn't a dust catcher but fits with the whole apple for teacher thing. Where did that get started anyway?

Preheat the oven to 350 degrees (my oven runs a little hot so I usually back off from the heat. If your oven is a little cold you might wanna go for 375) grease 12 muffin cups or line them with paper. Start off by thoroughly mixing the apple sauce, vanilla, egg, butter and sugar. Mix it until it is really well combined. Next combine all of the dry ingredients together and mix them well. Add the dry to the wet and mix it just until it is combined. It makes a thick batter. Now put an even amount of the batter in the cups and bake for about 20 minutes. Baking time will vary but you will know it is done when you put a toothpick in the center and it comes out clean. Sprinkle with cinnamon sugar while they are still hot. Yields 12 muffins.
Posted by Chris